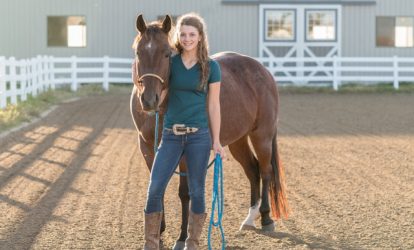 Rohan and His Favorite Girl

“I started detasseling because I wanted to save enough money to buy a horse.”

Standing fifteen hands tall, this chocolate brown beauty has a very special owner. Not very many teenagers can say that they purchased a horse using their own money. But Abigail Fox can.

From the day she began working for NATS, Abigail was on a mission: “I started detasseling because I wanted to earn enough money to buy my own horse.” She’d already been setting aside some of her birthday money and her allowance for the past four years, but still needed to save quite a bit more to afford her dream. Unfortunately, for the thirteen-year-old, ways to actually earn money were limited. NATS Detasseling provided the perfect opportunity for the young teen.

Although her parents had been paying for Abigail to take weekly riding lessons, they were a bit skeptical when she declared that she wanted to use her money to buy a horse. But once she promised that she would also pay for boarding the horse, they began to change their minds. Abigail put in the hard work, and her efforts paid off. Because NATS rewards experience, her dedication in returning year after year allowed her to fast-track her dream of owning a horse.

Because she wanted to be involved in the training process, Abigail looked for a young horse that still required a bit of instruction. In September 2017, Abigail made her long-awaited purchase. She named her quarter horse Rohan after the “riders of Rohan” in the book series The Lord of the Rings. Her purchase of the four-year-old horse allowed her to improve her horsemanship in both groundwork and riding.

After buying Rohan, Abigail went from taking weekly lessons to riding almost daily. This consistent commitment not only improved her skills as a horsewoman, but also changed the direction of her life. This fall, Abigail is moving to Colorado to attend a community college that offers an associates’ degree in horse training and management. To qualify for the program, she had to try out to be admitted. “If I hadn’t been working with my own horse for eighteen months prior,” she reflects, “I’m not sure I would have had enough of a skill set to qualify for the program.” When she moves to Colorado this fall, her beloved Rohan will be by her side.

This summer will be Abigail’s fifth summer of detasseling for NATS. She notes “that each year of detasseling has gotten better than the last one. Each year, you know more people and make more friends, and that makes the job even more fun.” To first-time detasselers looking for advice from a veteran, Abigail emphasizes that “although there may be days that you are wondering why you signed up, in the end, the job is totally worth it.”

Having seen her grow and mature over years of saving for her horse, her parents are now fully on board with Abigail’s dream of working with horses. The responsibility and grit required by detasseling have definitely played a part in her becoming a responsible young adult. It’s evident that eighteen-year-old Abigail has gained a lot of wisdom from the hard work she’s put in to realize her dream. She thinks her story can offer encouragement to others trying to do the same. “Pursue the passions that God has given you,” she says, “even if other people do not feel like your dream is going to happen.”

Author’s Note: This story has a special place in NATS owner Dawn Buell’s heart. Back when she was 12, she delivered newspapers to earn her own horse. Her half-Arabian, half-quarter horse, Foxx, was a part of her family for almost twenty-five years.

Want to know when 2018 applications open, along with any other updates or stories?